Skip to content
A career in music: exclusive interview with Emanuele Arciuli

One of the best known and acclaimed interpreters of 20th and 21st century music at an international level, pianist Emanuele Arciuli performs regularly for the most prestigious music organizations, from the Teatro alla Scala to the Venice Biennale, from Wien Modern - Musikverein to the Orchestra della Rai in Turin, from the Miller Theater in New York to the St. Petersburg Philharmonic Orchestra. He has played under eminent conductors, including Roberto Abbado, Juraj Valchua, Pinchas Steinberg and Dennis Russel Davies. Famous for his vast knowledge of the American repertoire and his interpretations, he often performs pieces that have been written expressly for him by some of the major American composers and works actively to raise awareness of modern music. He records for several labels and has written a number of books, which include Musica per Pianoforte negli Stati Uniti (Piano Music in the USA), published by Edt, and La bellezza della Nuova Musica (the Beauty of New Music), published by Dedalo. A professor at the Conservatory in Bari, Arciuli is also a frequent guest professor at many American universities.

At the Accademia di Musica Emanuele Arciuli teaches Advanced music course in contemporary music for piano and he is one of teachers of piano in the new Post-graduate specialist courses in music performance. As part of our section A Career in Music, we interviewed him to ask what advice he would give to our students, who are set to become the future generation of music professionals.

A musician’s key experiences usually occur when they are quite young because that time of your life is crucial for learning. At the Conservatory I had various teachers, but Michele Marvulli was a very strong influence, Then there was Leon Fleisher and lessons with Vincenzo Vitale, from the famous Naples school of piano. Naturally, the most important experiences took place after I had finished my academic training, both with the teachers I studied with, and, primarily, in the work I did alone. For instance, I had a great interest in contemporary music, 20th century music, so I wanted to study it seriously, but this meant I was forced to be my own teacher, and I learnt a great deal by myself.

One key experience for me was discovering American culture. It wasn’t an earth-shattering revelation, not at all. But it was a turning point and it gave my work as a musician a new direction and focus. 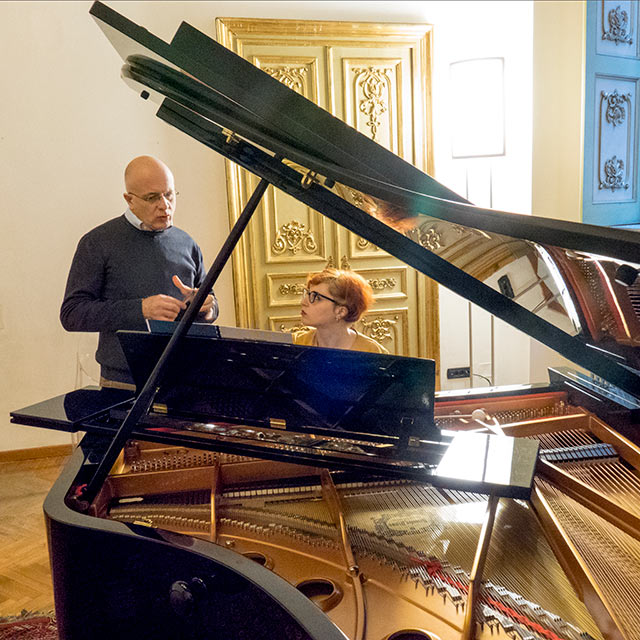 I would do so many things better! I would learn more English, I would study composition and, probably, I would make fewer decisions out of generosity and more based on self interest, which is something I didn’t always do. I have made so many mistakes, allowing myself to be guided by people who were not always the best suited to me, not the right fit. Overall, there really aren’t that many things I would do differently, because, in the end, doing things differently would mean that I would have taken other paths and therefore would have became another, different, person

I have never been interested in the idea of a career, this word that we use now but that really does not appeal to me. What interests me is to carry out my projects and create my programmes. And to do this at the highest level possible, in the best way possible. It has never been my ambition to tour the world playing Chopin’s 24 Studies. But I am interested in playing a meaningful role in the world of music, by stimulating the creativity of composers, for example, and working to arouse the curiosity of the general public.

My advice is to continue working as you are doing, to be patient. Don’t think about the abstract idea of being a pianist; think about realizing your potential as a person.

This website uses cookies to improve your experience while you navigate through the website. Out of these, the cookies that are categorized as necessary are stored on your browser as they are essential for the working of basic functionalities of the website. We also use third-party cookies that help us analyze and understand how you use this website. These cookies will be stored in your browser only with your consent. You also have the option to opt-out of these cookies. But opting out of some of these cookies may affect your browsing experience.
SAVE & ACCEPT